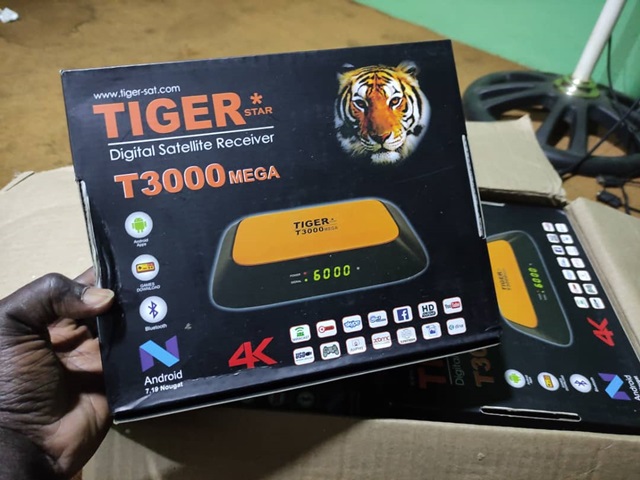 Tiger T3000 Mega 4K receiver is one of the most reliable digital satellite receivers. Tiger Star company is the first-ever to have released 4K android forever receiver launched since 2017. This box still stands the test of time with regular software updates fixing bugs and adding more features.

Tiger T3000 Mega is built-in with some advanced features with integrations of HDR 10 for 4K resolution, Forever Server Pro, pre-installed android apps, and IPTV. Let’s quickly check the key specifications and later do a brief review of the Tiger T3000 Mega 4K receiver.

This receiver comes with a stylish design in two colors and is lightweight because of the plastic makeup. The top of the Tigerstar T3000 Mega is orange with sensitive touch buttons and surrounded by black plastic.

A vents hole is at the sides, and the bottom sides with a rubber pad are placed at each edge to prevent slipperiness. The rear side features, DVB-S satellite modulator, coaxial, AV jerk, HDMI port, LAN, CA slot, MicroSD card slot, 2x USB port, and DC 12V.

The smoothness running and performance processor is Quad-core, 3798 Hisilicon processor, and the 2GB RAM system memory. The internal memory of 8GB is enough to playback the videos and store images. Alternatively, you can use the external storage of the hard disk with the slot sited at the bottom side.

Tigerstar T3000 Mega 4K receiver powered by Android 7.19 takes a friendly user interface with easy navigation. While testing the receiver, there was no hanging while changing from the android operating system to the standard satellite functions.

The preloaded server is Forever Server Pro.136, the latest version capable of opening many satellite packages, including the AFN, OSN, Nova, and SLTV Africa packages. The softcam key algorithm updates every day with the user’s intervention to update the key manually, making it easier for the receiver to auto-roll both Biss and PowerVU keys anytime. Unlike the Orca Server in Icone Iron Pro 4K receiver with less performance.

Tigerstar T3000 Mega 4K receiver comes with 1 month Apollo IPTV and a 12-Month Myhd Premier IPTV that allows you to watch any of your favorite live tv shows, both local and international. The resolution of 4K integrated into the Tigerstar T3000 Mega 4K receiver lets you watch crystal clear while streaming or watching high-resolution contents saved in the internal storage.

The unit price of the Tigerstar T3000 Mega 4k Receiver cost is different due to availability convenience. The price tag from our store is $250 without shipping to any country. You can hit our contact page to place an order, and we accept western union, World Remit, Skrill, and PayPal.